Why yes… I did just use math in my Christian Spirituality class.

The Argument from Empiricism

Atheism in Society: Discrimination and Misunderstandings

At his recent inauguration, Alabama governor Dr. Robert Bentley, M.D., stated that those who were not Christians were not his “brothers and sisters”:

“Now I will have to say that, if we don’t have the same daddy, we’re not brothers and sisters. So anybody here today who has not accepted Jesus Christ as their savior, I’m telling you, you’re not my brother and you’re not my sister, and I want to be your brother.” (Source: Birmingham News)

Dr. Bentley is also a Sunday school teacher and deacon at the First Baptist Church Tuscaloosa, whose policies include “passionately” evangelizing the gospel and whose mission statement defends the governor’s comments.

“First Baptist Church meets to magnify Jesus Christ and multiply His Kingdom, to mature believers into effective Christ-followers, and to minister to other’s in Jesus’ name.” (Source: First Baptist Church Tuscaloosa website with their stress)
Dr. Bentley has since offered an apology if his comments were offensive after meeting with Alabama’s Jewish leaders, but maintained his beliefs on the matter had not changed. David Silverman, president of the American Atheists, remarked, “He is a governor, not a mullah. This is a diverse nation with secular government. If he doesn’t like it, he shouldn’t be governor.” Conservative talk show host Glenn Beck even chastised the governor for his comments.
Across the pond, strong religious convictions also stirred public interest. Civil partners Martyn Hall and Stephen Preddy were awarded £1,800 each by Judge Rutherford of the Bristol County Court for being unfairly discriminated against by Peter and Hazelmary Bull, owners of the Chymorvah Hotel, when they were not allowed to reside in a room with one double bed. Mrs. Bull spoke of the hotel’s policy after the hearing: “Our double-bed policy was based on our sincere beliefs about marriage, not hostility to anybody.” (Source: BBC UK) The policy applied to all unmarried couples, as it was considered by the Christian couple to be sinful to lie together as an unmarried couple. The court upheld the status of civil partnership as equal to marriage in the United Kingdom and stipulated that public services could not be denied based on religious conviction.
There has been mixed response to the ruling of the judge. BBC One’s television show “The Big Questions” addressed the situation by prompting the audience to respond to the question, “Is it always right to uphold your religious convictions?” Christian barrister Mark Mullins told partners John Morgan and Michael Black to “turn away from their sin” whilst defending the Bulls’ choice. Mr. Morgan and Mr. Black had faced a similar situation as Hall and Preddy by being turned away from a bed & breakfast for wanting to share a bed. As another participant in the debate, Orthodox Jewish Rabbi Yitzchak Schochet maintained that he can and should uphold his religious conviction, but said that “what (he) cannot do is impose those convictions on other people. That is fundamentalism.” A Catholic priest addressed by the host as “Jonathon” maintained that religious people should uphold their deepest convictions, but that they should also be willing to face the legal consequences of their actions. (Full video below)
———————————————————————————
When talking about the relationship between religion and the government of any free country, especially in the United States, the topic of the separation of church and state as stated in the First Amendment of the United States Constitution inevitably becomes the focal point. Whether it is the idea of a National Day of Prayer, the financial dispensation of religious organizations, or, on some level, the ever-present battles of equal marriage rights for homosexuals and reproductive rights, the language of Thomas Jefferson and the First Amendment is invoked by pundits on both sides of the aisle. The debate about what religious freedoms (including the freedom from religion) are or should be guaranteed is immensely fascinating and I am always willing to engage in that debate, but I am not currently addressing the core of that discussion. It is, however, rather related to my topic in this article. Here I would like to approach atheism sociologically, with a concentration on government, and to fuel a discussion of what to do about the problems emerging from society’s current view of it.
Unfortunately, Dr. Bentley’s sentiments are not wholly uncommon among leading politicians in America. Our 41st President George H. Walker Bush said, “I don’t know that atheists should be considered as citizens, nor should they be considered as patriots. This is one nation under God.” Recent memory cannot forget the religious language used by his son, former President George Walker Bush, in relation to the War on Terror. Former Vice President Al Gore once remarked on 60 Minutes that the “anti-religious” view was arrogant and intimidating.
Currently, there are no atheists in the executive branch or in the Supreme Court, and there is only one member of the 535 member of congress that identifies as an atheist, and that is Representative Pete Stark, Jr. of the 13th Congressional District of California. Mr. Stark has stated that he is a Unitarian that has no belief in God, although when surveys of religion are taken of Congress he has marked himself under the Unitarian category. The most recent Congress has 6 people who did not specify their religion. That leaves up to 0.2% of Congress to represent the non-religious sector of America, which ranges between 6% – 18% depending on which survey you choose to believe. Any way you look at it, the non-religious community is vastly under-represented. Equally surprising is that around 50% of people said they would not vote for a qualified atheist in a 2007 Gallup Poll. 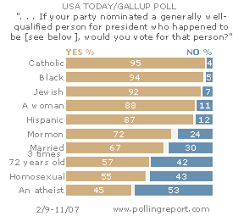 Would you vote for an atheist President?
So what to make of this? It seems that a lot of the prejudice against the atheist community stems from either excessive religiosity or some misrepresentation of facts. While one is hard to change, the other involves an increase in education. The first point is that while our Pledge of Allegiance still holds the phrase “under God” and our money bears “In God We Trust”, both directly violate the aforementioned First Amendment’s Separation of Church and State. Both are clear endorsements of belief in a spiritual, religious being that are not universally endorsed by our nation’s constituents, or even by our nation’s forefathers.
The second point to note is tied in with the second story summarized above. Two men who were civil partners, an equivalent in the UK to marriage, were denied patronage in the same bed at a hotel owned by a Christian couple. While, rightly, that was ruled illegal by a court in the country, the comments during the discussion on BBC’s The Big Questions is rather interesting. Ignoring the comments from the barrister, I was pleased to see both an Orthodox Jewish rabbi and a Catholic priest both arguing that one should stick to their religious convictions, but that, as the rabbi put it, they should not impose them on others or, as the priest put it, they should be ready to face the legal ramifications of acting on those convictions.
Now unless you believe that an owner of a business that provides a public service should be able to deny services offered to the rest of the public based on their religious convictions, the importance of the court ruling cannot be understated. Granted, few atheists are ever denied hotels or bed & breakfasts (and it is important to keep it that way), but often they face discrimination similar to that of the LGBT community in that it is often religiously fueled.
In June 2010, 16-year old James Doyle was shot and killed by his 14-year-old Christian “friend” Danny Nadler after having an argument about god is a prime example. The 2004 deaths of atheist Larry Hooper at the hands of his Christian roommate Arthur Shelton and Australian atheist John McDonald (with an axe) from Ashley Appoo are also examples of admittedly-perverse Christian believers murdering based off prejudice.
Another common form of bigotry expressed in America specifically is the idea that we are a Christian nation, as reiterated by both of the Bush presidents. (See above) Atheists are far less prevalent in media, and face discrimination in the workplace, at school, in child custody cases, and even in the Boy Scouts of America. (Several links below)
Many people attribute the prejudice against atheists to a belief that atheists lack moral values or have some comprehensive world view that is against their own, both things that are not true. So I ask the readers: What do you think causes all the prejudice against atheists? Is it misinformation? Is it intertwined to the climate of politics and media that leaves out the non-religious minority while increasingly promoting other minorities?
I think it is apparent that there needs to be some concerted effort to shift the public’s mind on atheists. What, if anything, should be done?
Ben Conover is a philosophy and classics major at Boston University.

Links of prejudice and bigotry against atheist: